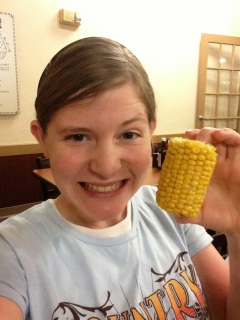 Totally not the best picture of me… I actually just snapped it to send to my bro, but then decided to post it on here, because looky there! Corn on the cob! Corn on the cob! Having my braces off is a huge treat. =)

I’ve been brainstorming for my When Life Hands You Lymes book for a while now, but the plot wasn’t really getting written down. This book is hard for me, a definite challenge! Anyway, I keep telling myself “Ok, Aidyl, just sit down and work on it!” and it seems as if something always pops up. (It’s amazing how much can pop up when it will keep you from doing something you don’t feel like doing…)

Then last night I’d had enough of my lolly-gaggling (I’m not sure if that means anything, but I’m trying to say I’d had enough of my excuses) and so I told myself to sit down and stop the brainstorming and work on the plot. So I did. And I worked on it for quite a while and got a good amount done. Now I’m happy and looking forward to writing more of the book. Hopefully this will do away with most of the rambling that was taking place during those first few installments.

Yesterday some of my siblings and I were swimming and a fun idea popped into my mind, so I turned to my sister, Mariah, who’s 14 and said “Hey, let’s see who can go for the longest without touching the bottom or sides of the pool and without floating on their backs.” She said “Ok”, so we started. The pool isn’t very big, but it did have a section that is maybe six feet deep, so we both went over there. We later amended the rules to say that if you by mistake brushed the bottom of the pool, you weren’t disqualified.

My whole point of doing this was that I was really tried and yet still wanted to get some exercise in, and I figured if I was treading water, then I would be doing just that. After a few minutes, Mariah looked at me and said, “You know, this is going to be really bad because you and I are both competitive.” And she had a point there. I had already decided that there was no way Mariah was going to win, and weirdly enough, she had decided that too. Which means it was a stale-mate.

I really have no clue how long I thought it would last, but after about twenty minutes Mariah asked “Can you touch now, Aidyl? I’m getting tired.” The question was repeated in 2-5 minute intervals for the rest of the time. Of course I said no. At about 25 minutes, Mariah said, “If I win, you have to put this on your blog. If you win, we’ll all forget about it. Ok?” Of course I said no about that as well.

After a while my arms got tired, so I worked on just resting them while sinking down part way, and then kicking my legs to get me back up. Just remember that we don’t have a lot of opportunities to go swimming, so therefore we’re not really good at this kind of stuff.

Finally at 48 minutes, Mariah asked “If we both make it to an hour, can we call it a tie and both touch at the same time?” I agreed, and so that’s what we did. So yes, Mariah and I had fun treading water and swimming around without touching for 60 minutes. I think that might be the longest I’ve ever gone without touching anything (except occasionally a sister would brush past me). It was fun, tiring, and a cool challenge. Sisters are great!
***
Do y’all like to go swimming?

17 thoughts on “Plotting and Swimming”