January slid by as if it were an ice skater gracefully twirling past.
February bounded into the room turning my world topsy-turvy.
March threw me a blanket and begged me to hibernate.
April let out a gleeful laugh and grabbing my hand, pulled me into the busyness.
May coxed me with visions of order until I capitulated and entered the fray of spring cleaning with a vengeance.
June waved once and was gone.
July blew in like a storm, swept me off my feet, surprised me, and left as quickly as she arrived.
August offered flowers and joy and memories to last a lifetime.
September shouted “Don’t forget me!” yet somehow I already had.
October peeked around the corner and beckoned me to jump into a tidepool of craziness.
November called out “This is your new normal! Rejoice!” And so I did.
December winked and led me to the door of a new year. 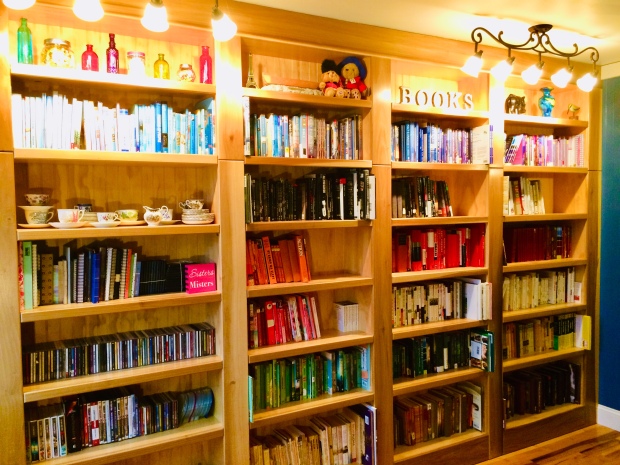 Beginnings. Twenty-Eighteen dawned with the promise of new beginnings and an annoying flu that took me down hard and kept me in bed for nearly a week. It wasn’t exactly the start I had planned for the year and by the time I was better again I was rearing to go and hit my goals with enthusiasm.

January was full of company, editing, plotting, and eloquent thoughts about books and writing and art as I looked forward to a new year. I also missed several days of work due to icy roads, took a trip out to PA for a wedding, and was thrilled when my cousin agreed to be my goal accountability partner.

Anticipation. February promised to hold a dream come true for me. I was invited to attend the birth of my best friend’s baby, and although she wasn’t due until the middle of the month, I was practically glued to my phone as soon as the calendar read “February” – you know, just in case she went early.  This post was written during the early stages of her labor, and also chronicles my start into the world of Instagram stories – which is actually something I greatly enjoyed getting into during 2018.

I also signed up for a half marathon (that would take place in October), spent a lot of time helping my friend after the baby was born, hanging out with company (including my friend Kaitlyn who I met through blogging), and being a dedicated little writer. February was also the month I began teaching Children’s church and that was a big stretch, but oh! So worth it.

Change.  My six-year blogging anniversary prompted me to do a whole series of posts about blogging, what I’ve learned, and why I blog. Those ended up being some of the most popular blog posts on Noveltea during 2018 and were a lot of fun to put together.

I also had a dream come true/prayer answered when Hosanna – who I call the other half of my brain – moved in with our family. I had recently had several sisters begin dating and was going through a really rough time, so to have her close by helped tremendously. I ended the month in PA at a mission conference where I helped at a booth. 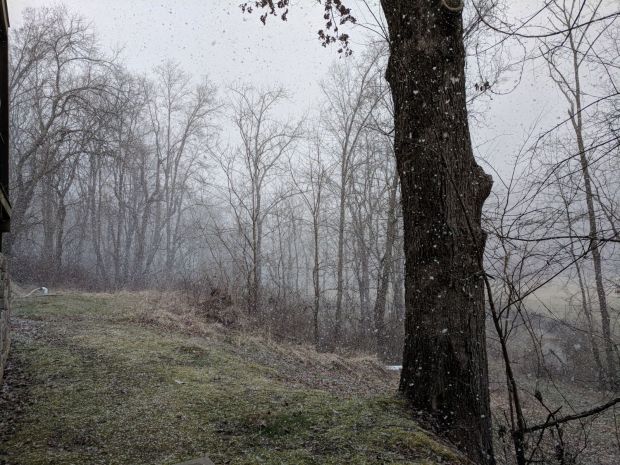 Learning. We had Christmas in April with my adopted parents. It was pretty epic complete with decorations, Christmas cookies, and a gift exchange. Highly recommended. 😉 April also included a lot of sickness for me which isn’t ideal, and my first time of falling way behind while doing the A to Z Blogging Challenge. On the bright side, I made a couple of food blogs – pretty much a horrible fail, but dream come true nonetheless.

Organized.  Due to many things, but mostly the craziness of watching two of my sisters/best friends fall in love and get engaged, I found it very hard to concentrate on writing of any kind. I cut my blogging back massively and tried to find balance with the rest.

My family headed out of the country for vacation, and I had a week or so at home with only Hosanna before flying out to join them. Vacation saw me gobbling down books at a rapid pace, playing cards late at night with my dad and brother, watching the Royal Wedding after a nearly sleepless night, then heading back home – again before the rest of my family. During my time home basically, alone, I was inspired to deep clean my room. And when I say “Deep Clean” I’m talking about literally dumping out every box and drawer I own and sifting through the stuff thoroughly. It was amazing.

I also – deep breath – decided to move a bed into my room (after six years of not sleeping in one). Call it nostalgia due to sisters getting engaged, but things from my childhood suddenly felt necessary necesary part of my life again: A bed, a CD player, and a garden.

The garden was also a big part of May, and a ton of fun to work on planting. I also got four delightful ivy plants which I named Maggie, Nathan, Will, and Katie, and prayed that they would live long and prosper. (My track record with indoor plants is rather horrifying.)

Summer. June was busy with both my jobs, plus the biggest week of the year at our retreat – a week that went far better than ever before and was a huge answer to prayer.

Best. VBS at our church started the month off with a grand bang. SO. MUCH. FUN. I’ve been a teacher or assistant for multiple years, but most of the time it was last minute when a class had to be split, etc… So I never really got to plan and prepare. This year I sat in on the planning meetings, got the material weeks early, and decorated my room in high fashion. Plus I also had Ben (who’s basically the brother every girl needs) and Hosanna as my assistants. It was delightful in the extreme.

Early in the morning the day after VBS ended a couple of my sisters and I traveled down to TN for one of my sister’s bridal shower. We were only going to be gone one night so I packed extremely light…and then ended up working it out so I could be dropped off at the Creation Museum on the way home so I could spend the week with my adopted parents and go to the Answers Conference. My sisters pooled together and let me borrow various clothing items from them, and I learned that packing light is great, but sometimes backfires.

Also, we camped and that was pretty epic. 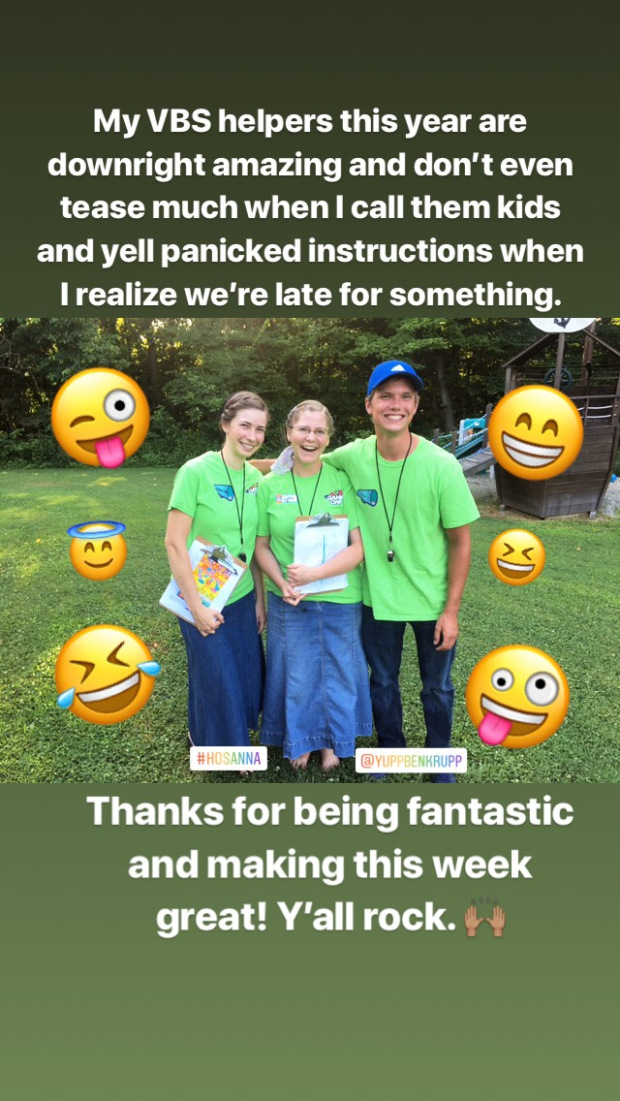 Tresured. I’m really not sure how to capture August in the space of a few words. My sister got married at the end of the month, and with another sister getting married just five weeks later the month was bursting with wedding-ish activities.

We also took an unexpected trip to MI when one of our best friend’s mom unexpectedly died.

August was a very important month for me to realize just exactly how much certain things mean to me. I’ll forever treasure the memories and lessons I learned. 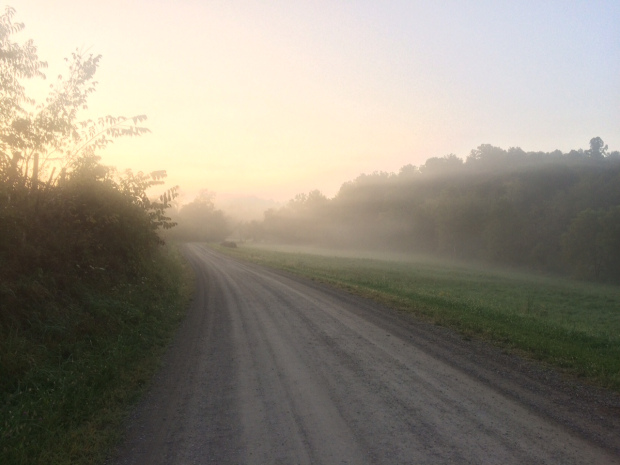 Blur.  My favorite part of the month was when we went to TN for a second wedding reception for the above-mentioned sister. It was a mini family vacation and chocked full of amazing memories.

During this month I also got to meet Bekah, a friend I met through blogging nearly five years ago and have corresponded with ever since. It was delightful to get to meet up and have coffee together. ❤

The rest of the month was a blur for me as I dealt with thyroid and adrenal issues, dropped out of training for the half marathon, forsook my garden which by this time was a weed patch, and planned a couple’s shower and bachelorette party for my other sister.

Turning twenty-six was more like a brief interlude during a time of craziness more than anything else, but my sweet family did take time to celebrate with me.

Dream. Being a flower girl/maid of honor for my sister was lovely indeed, and I’ll always feel special that she made that dream come true for me.

The rest of the month I wanted to hibernate but ended up going to our church’s Young Adult retreat which was utterly amazing and included playing tag in a big dark gym which will forever be epic. The day that the retreat ended I flew to Florida to visit my grandparents. It was the longest I’d gone without seeing my grandma in probably forever (almost 13 months) and I was delighted to visit them again.

Delightful.  November was like a warm hug on a cold day – when all of the craziness of the year subsided and a new normal finally emerged from the beautiful rubble of change. I saw how lovely it is to have multiple married siblings nearby to visit, laughed a lot, learned even more, and celebrated the people in my life.

I spent several days with my adopted mom and that was fantastic and full of fun as we got to do special things together.

At the end of the month, I went to TN to work as a cook at a Youth Camp for a week. It was stretching, delightful, terrifying, amazing, eye-opening, and something I very much want to repeat. It also reminded me of how impressive my family and friends actually are and how grateful I am for them. 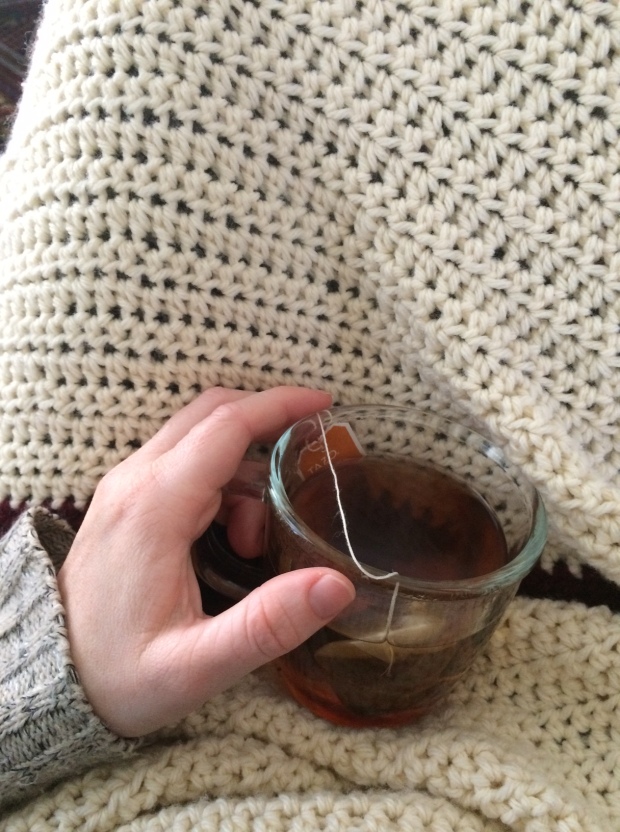 Rapid. In all reality, I feel like this month should have just begun. This was the first Christmas season in years where I was left being like “Where did the time go?” It might be because I was gone for the first few days of the month, but ever since I got home I’ve felt like I’ve been scrambling to pack everything into twenty-eighteen that was supposed to be here.

A quote from my blog to summarize my year: Crying can actually be very helpful. Staying hydrated is fairly important, too. And there you have it, folks. 😉 Twenty-Eighteen was a wonderful, hard, change-filled, memory-abounding, never-to-be-forgotten year of firsts, lasts, and many in-betweens. I’ll forever be thankful for it and all the fantastic things I gained, learned and went through in a totally packed 365 days.

This year wasn’t at all like I would have predicted, but goodness! I am incredibly happy and thankful and amazed by it. I learned so, so much. Had so many very specific answers to prayer, and deepened so many relationships.

Also, I got to beta read/proofread for one of my favorite childhood authors and the author who started the online writing group that I was very involved in for years. I’m honored beyond words to have been a small part of both books.

Bookstagram also was a big part of the second half of the year, and a totally cool (and new) experience for me.

If I were to describe Twenty-Eighteen in one word, it would be People. Between work, people moving in, sisters getting married, and the friendships I’ve built and strengthened, the last twelve months have been the most people-y that I can remember. It’s been stretching for sure (especially for little introverted me), but also something I treasure more than I can express and am so grateful for.