I had a story idea tumbling around in my head for most of the last year. It would pop up at random times, beg me to give it attention, and then fade to the background when I shushed it with words of “Not now, not yet.”

All along though, I knew that someday the timing would be correct, and I’d be able to embrace the tantalizing new idea and give it my full writerly attention.

Thankfully, that day came yesterday. I’d decided for various reasons that I needed to put my current WIP on hold. After that I had several options I could go with: Re-write Echoes, work on a story concept I’d been developing for a while, or finally delve into the world I’d been imagining for the last while. Obviously, I chose the shiny new project.

I was rather amazed by how much I actually knew about the setting since I’d never really sat down and thought about it. All the ideas, first lines, plot twists, and stories that had randomly fallen into my mind as I went about daily work were now falling into place. 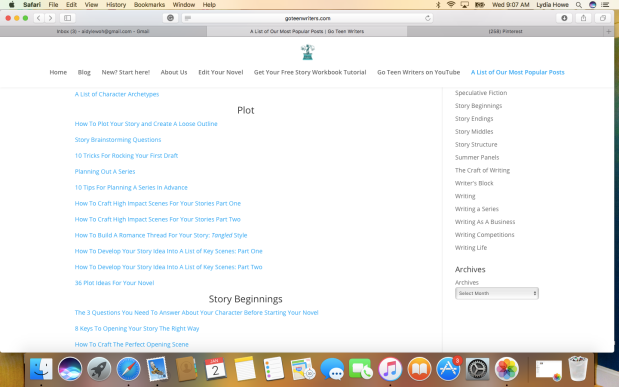 One of my biggest flaws of a writer is having a plot that really doesn’t flow well. My timing is incredibly off and the character arches always need a ton of help. Everything seems to happen in a random few chapters and then the rest of the book is filled with loveliness, but loveliness that not many people will really care about.

So, this time around I’ve decided to do it right. Have a solid plot. Know exactly what’s going to happen when and why and probably even where. It’s a daunting task, really, but I’m sure it will be good for me.

My desk is now full of resource books, lined cards, colorful pens, corkboards, and every other item that a writer could possibly need. (Aka, washi tape, because that pretty much makes everything better.)

My computer is now full of taps like “Go Teen Writers” and “Pinterest Plot Diagrams” and Google searches to figure out how to spell various words.

My brain is now full of how I’m going to make it work, and goodness, doesn’t that character have the cutest name? And why would so-and-so ever do that? And what’s the lie such-and-such a character believes?

And that, my friends, is a little glimpse into my writingish world.

Currently:
Setting: My desk
Listening to: Whimsy hop around in his cage behind me
To-Do Today: Go to work at the coffee shop
Random Fact: I’m taking rice and broccoli stir-fry to work for lunch today

6 thoughts on “A Glimpse Into My Writingish World”