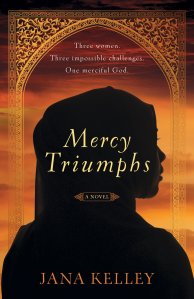 About the Book (Backcover Blurb):

Three women. Three impossible circumstances. One merciful God.
Mia, an American Christian, has lived in Sudan so long that persecution, harassment, and danger have become commonplace for her. Her tough outer shell threatens to harden her heart while her newly Christian friends, Halimah and Rania, former Muslims, are forced to live in exile outside Sudan. All three quickly discover that escaping danger in one place only means facing even greater challenges elsewhere. As God’s mercy becomes evident in their lives, they must choose whether or not to offer mercy to those who don’t deserve it.
Third in a trilogy, Mercy Triumphs opens the reader’s eyes to modern-day persecution and the life of Muslims in Sudan. Based on real-life events, Mercy Triumphs reveals some of the struggles Christians face when living under Islamic law. The reader will be inspired to pray for new believers, those who are persecuted for their faith, and even for the salvation of the persecutors.

Why I Choose this Book:

Earlier this year I read the first two books in the series, Side by Side and Door to Freedom – both of which were really eye-opening. (You can read my reviews for them here.) When I saw there was a third book in the series I signed up without even reading the backcover blurb.

What I Thought about this Book:

Like Door to Freedom, this book could have been read as a standalone, but it helped to have the background from the last two books to explain who the characters were, etc…. Although this book wasn’t as “gripping” as the first book was to me, it still kept my attention and made me want to find out what was going to happen.

The author does a fantastic job of showing what it’s like to be a missionary – not days full of excitement as you see person after person responds to the truth of the gospel. Instead, living on the mission field is full of every-day life activities that are often times harder than what we’re used to because you have to learn a totally new system, language, and culture. Plus, a lot of second and third world countries don’t have all the amenities we’re used to in first-world countries, and so, therefore, every-day chores are more time consuimg and difficult. The author shows all this but in an interesting, weave-it-into-the-story type of way. I never felt bogged down with details.

It was also really interesting following the other two main characters and seeing what their lives look like as “runaways.” I could see the world they lived in – feel what was going on and understand their thought processes even when they were so different from what I was used to.

The plot moved at a good pace, although not super-fast. The last couple of chapters weren’t what I had expected, but it was so realistic (at least from the main point of view). From friends I have that have been in the same type of situation (loosely same, anyway), I felt like it was portrayed really well.

If there was another book in the series (which I doubt there will be) I’d jump at the chance to read it. I can’t think of any complaints I have from this book – it was pretty spot-on.

My best friend is reading the series and really enjoying it. One thing she and I discussed is that in addition to the series not being good for kids, it’s also probably not the best for guys because of some of the issues that are shown in the book.