This book review isn’t one of my normal ones, it’s more me highlighting a whole series for y’all.

Back in April I entered a giveaway that was sponsored by a lot of authors. Through the giveaway I ended up subscribing to all their newsletters – I didn’t have to in order to enter the giveaway, but I thought it’d be a good way to meet new authors.

After the giveaway (which I didn’t win), ended, a bunch of the author sent out newsletters introducing themselves, and many of them included links to free e-books, which was pretty amazing. One of those authors really stuck out to me because she said “One of the best parts of being an author is connecting with my readers – so why not reply to this email and tell me a little about yourself.” So, even though I’d never heard of the author before the giveaway, I replied. Thus started a short conversation between the two of us that got me interested in reading her books.

You can see my reviews for the first five books here: Book #1, Book #2, Book # 3, Book #4, Book #5. Half of the books in this series have been four-star books, and if you’ve been around Noveltea long, then you know how rare it is for me to give a fiction book four stars. (Meaning, I’m really impressed by this author and her writing.) 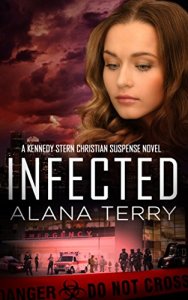 I’ve enjoyed this series so much that it’s taken me less than a month to read through all of it. When I finished the 5th book in the series I was disappointed to learn that book #6 hadn’t been released yet. I pre-ordered it right away, then went ahead and contacted the author, asking her if she’d consider sending me an early copy so I could review it, and she graciously agreed. *cue excitement*

A global epidemic has doctors and health-care workers panicked, but life continues on as usual for college sophomore Kennedy Stern, who’s not about to let a little virus interrupt her premed studies or dampen her spring break.

When she finds herself isolated in a hospital lockdown, Kennedy and all those quarantined with her can only guess who will survive and who will succumb to the deadly threat confronting them.

I was in the middle of another book at the time I received this book, so I didn’t get around to diving into Infected until a day or two after I received it. Then the book drew me in, intrigued me, and made me want to keep reading, reading, reading. (And that I did, until I finally finished the book a little after one last night.)

Once again Miss Alana delivered a winner. The characters are well-developed, unique, and stay true to who they are, while having believable character growth. The book starts out at a slow pace – something I really like, because it has time for me to enjoy the characters before the action begins; kinda like visiting with friends. All my favorite characters were back in this book, including Dominic. I was *so* happy to see Dominic and only wish he’d have been in more scenes. (And, that’s all I’ll say, even though it’s hard to stop there, because I don’t want to have any spoilers.)

As always Kennedy responded to things in such a different way than I would, which made it intriguing to see the world from her point of view. I like how her parents play a clear part in the book, even when they physically haven’t been present in any of them.

One of the main characters in this book is Wrong, a little boy who was adopted from Korea. He was written so realistically that even I felt tired listening to the many questions he asked Kennedy; he also reminded me of a kid I know. His questions, appetites, and random hang-ups (“No, that’s not good grammar, you have to say it this way!”), made him a charming, albeit somewhat annoying child. (It’s clear Miss Alana knows how to write kids well.)

This book deals with issues about why God allows sickness. This is a subject I have thought about and studied a lot due to fighting a disease for nearly a third of my life. Once again I felt like the book was mostly about asking questions on this topic, not giving answers, which in reality is fine and didn’t bother me in the other books. Since this topic is so close to me though, I really wished that the subject of living in a sin cursed world, and the fact that *that’s* why there’s sickness in the world, would have been brought up. Because of that being absent, the book fell just-just-just short of the four-star mark for me. (I rarely give out four-stars for books – in fact, the Kennedy Stern series has received most of my four-star ratings for the last two months of fiction reading, with half the books in the series reaching that allusive status.)

After the first part of the book the pace really picked up, and a few plot twists occurred. As always the writing was well done, the plot well crafted, and the storyline intriguing. I did find myself skimming a bit of Kennedy’s internal monologs at times, simply because I *had* to find out what was happening next.

If you like reading well-written contemporary books with non-detailed violence, then I highly recommend this series. I can hardly wait for the next book in the series…. Oh, and just a note. You really do need to start out with Book #1, and read the books in order. You can read the first book for free here.

You can find out more about Alana Terry (including the fact that she lives in Alaska!) at her website by clicking here.