March 8, 2016September 10, 2016
Over the last four years my blogging quarters have been changed up a bit, although when I look back through the picture, I’m amazed at how alike they actually all are. I started out blogging at this table which I used as a desk. I lived in a barn at the time which was pretty cool. 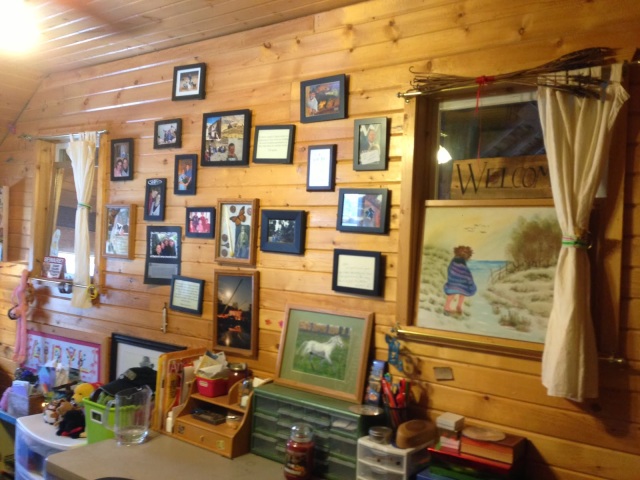 During November of 2012 I took part in National Novel Writing Month and discovered the wonderfulness of writing from an easy chair. I spent the next three years of my life writing almost exclusively from comfortable seats, often with my legs tucked up under me or propped up in front of me. It was delightful.
This (below) was my writing corner from November 2012 until June of 2014 when my family moved. Hundreds of blog posts came to life in this cozy nook. In fact, if you look closely at the computer you can see I was drafting a post on it. 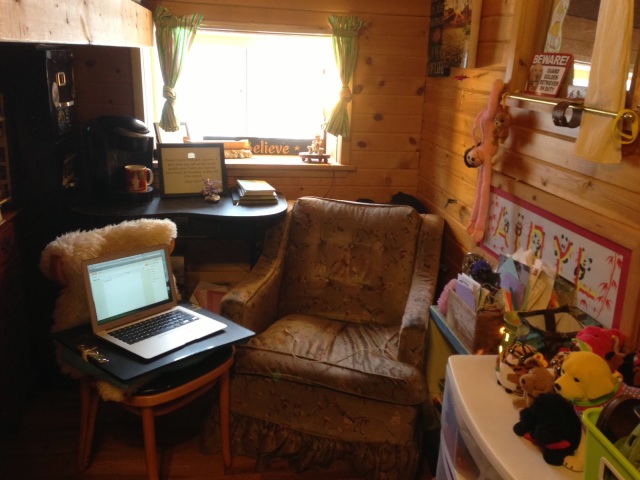 My new office was a bit more spacious, although not in the loft of an old barn. Since I enjoyed my previous office so much, I modeled my new writing corner in almost the same exact way. (Note the stuffed animals in the right corner. Stuffed animals do wonders for the imagination.)

This was my happy, and bright, writing space from June of 2014 until November of 2015 when I took part in my second National Novel Writing Month. There’s a long story I plan on blogging about some time, but let’s just say I found out that I had deplorable writing posture and an easy chair is not the place to spend hours each day working. 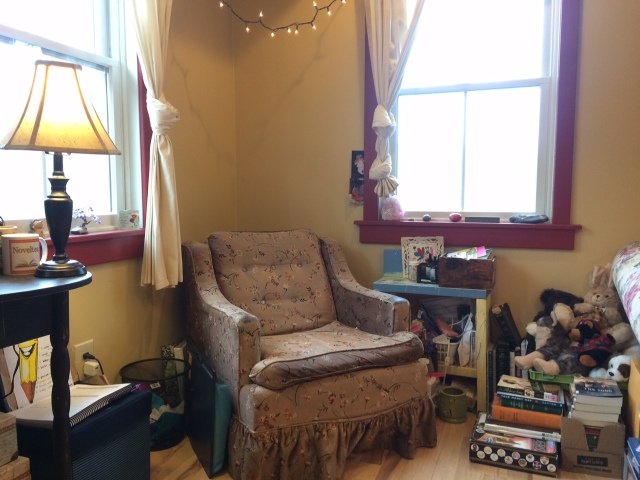 Amusingly enough it was back to the foldable table for me (although a different one than before). I shifted my office furnishings around and eventually came up with this winning combination. Now I write with my feet flat on the floor, my back at least somewhat straight, and my computer at eye-level. It’s not quite as comfortable, but my body feels a lot better. 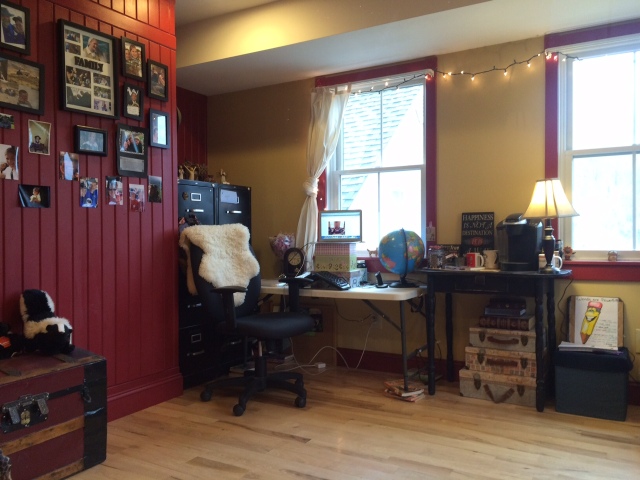 So there you have it, the four basic places I’ve written my blog posts from. Of course there have been blog posts written in other locations.
I’ve written posts rocking in a hammock in North Carolina, surrounded by friends in Nebraska, in wind-swept Aruba, outside of caves in Tennessee, in the sound booth at the Creation Museum… At a friend’s house in Asia, in vehicles in multiple states, in a cute beach cottage in Hawaii, in an apartment in Frankfurt, Germany, walking down the road, in doctor’s waiting rooms, in an old palace in Vienna, Austria… In hotels in Colorado, in airports all across the world, in a friend’s basement in Georgia, and the list could go on.

Pretty much Noveltea, and therefore y’all, have been a big part of my life and followed me around the world and through the ups and downs of being a writer for the last four years. Thank you so much for joining on this journey with me.

I’m reposting the giveaway here so y’all can get more entries (you can get a lot of the entries each day, not just once).

Question of the day: Where is the strangest/coolest/most unique place you’ve read a blog post?