August 21, 2015September 10, 2016
Hey Everyone! Yes, yes, I know this post is rather late. It seems to be the theme on the Friday posts, but it’s up! Welcome to the 84th segment of my fictional story, When Life Hands You Lymes… 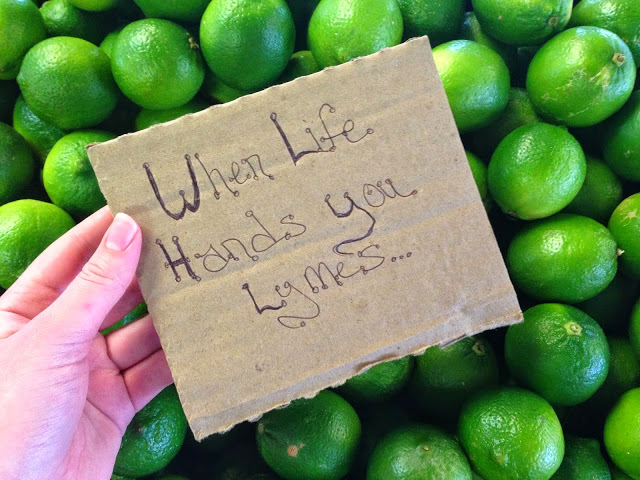 “That’s when the trips to the doctors began. There were so many of them. Different doctors had different responses. Some doctors we went back to, others only took one visit for us to know they weren’t going to be helping with what we needed. It was also during that time that I began to realize people weren’t understanding what was going on. Because I still looked fairly healthy and normal, I began being pegged as lazy. As a snob. As someone who didn’t care about her friends any more.
“I tried to explain what was going on, but there was no diagnosis. Even my closest friends tried to rally me out of my silly, sick mindset. They thought that if I just made up my mind to be better, then I would be. I remember one particular time when I had a handful of my closest friends come for a sleepover. I’d been looking forward to the party for weeks. My happiness knew no bounds when I actually felt well and enjoyed hanging out and playing games with them. That was until they gave each other knowing looks then gathered around me in a half circle. I asked them what was going on, what was wrong. They told me that they loved me too much to let me keep on being sick when all it was was my mindset. They told me that they wanted me to start hanging out with them all the time again because they knew that if I actually got up and did stuff, then I’d feel better. That I was making myself worse by allowing myself to imagine something was really physically wrong with me. After all, the doctors couldn’t find anything, right?
My little world of happiness fell apart right there. It was a sting deeper than any physical pain I’d ever felt to hear my closest friends tell me that. They were just like the rest. They thought I was lying, they thought I was putting on a show because I was lazy. I determined there and then that I would hide it. I would grit my teeth and bare it whenever possible, and when it wasn’t, I would hide out by myself.
“I became an expert at finding quiet nooks to curl up in when I couldn’t talk my way out of going somewhere, but more often then not I either stayed home or retreated to the car as soon as I could find a chance. I went into survival mode. I learned how to cope and deal with what I had to. I learned to be content being by myself. I learned to expertly avoid people. But I never learned to deal with the pain. I never learned to get over the deep desire to have someone who truly understood me.
“I’d lie in bed at night, though the long, lonely hours of darkness and pray, begging God to give me someone who would be there for me. Who wouldn’t consider me to be lazy. At first I had people in mind when I prayed, but at last when person after person let me down, I gave up on suggesting names. I spent those years feeling so isolated. I often wondered what happened to the happy-go-lucky Madalyn of the past, but I couldn’t find even a figment of her in the loneliness of my reality.
“Then came the day when I decided it was useless to continue feeling sorry for myself and so I decided to snap out of it. It wasn’t easy, but I made it. But by that time, even when I did want to be around people, I often didn’t feel well enough. I can remember going to my aunt’s house and lying up in the guest bedroom, ears straining to hear the conversations that were going on downstairs as my body rebelled against me and tied me down with exhaustion and pain.
“Eventually I learned how to deal with that, too. My aches, my migraines, my stomach-clenching pain and my constant fogginess of mind became my norm. I was happy. I learned how to push through. Getting up and working for several hours a day was a victory and one I was happy to celebrate. I was the happiest I’d ever been in my life because I learned to rejoice even when things didn’t go my way. I was content. I even told God that if He was going to allow me to be sick for the rest of my life, then I could deal with that, I could find joy in living the life He’d given to me.
“Then we changed some medications and I would go through spurts where I felt well. I was thrilled. I couldn’t do enough. I worked until I fell exhausted into bed and then I would lie there, heart racing and hands shaking from pushing my body too hard. I had to learn the lesson of being content all over again. As soon as I could work, I put my identity in what I could accomplish, not in who I was in Christ. It was a long, slow lesson, but eventually I began learning it.
“Then we found out I had Lyme disease. My word suddenly became a brighter, happier place. I had hope. I had a light at the end of the tunnel. They warned me it would be a year or so before I was better, but they could have told me five years and I would have been equally as ecstatic. Just knowing that I had words to describe what was happening to me was more than I had been able to hope for. Now I no longer had to be ashamed of not feeling well. Now I could say that I was going to get better, but it was a process. Now people would understand. Or so I thought….