March 14, 2014September 10, 2016
Happy Friday to y’all! Before we get to the eleventh segment of When Life Hands You Lymes, I have a couple of things to say:
1. The winner to My First Royalty Check Giveaway is… Ray R! Yay! I’ve already been in contact with her and will be sending the book out today.
2. Quick change in the story line for When Life Hands You Lymes… Madalyn was asked to audition for the for the piano with the Ashburg Symphony, I’m changing that to violin (although she still plays the piano).
3. Only 42 more days until I’m, Lord willing, leaving for Europe!
And now to segment eleven: 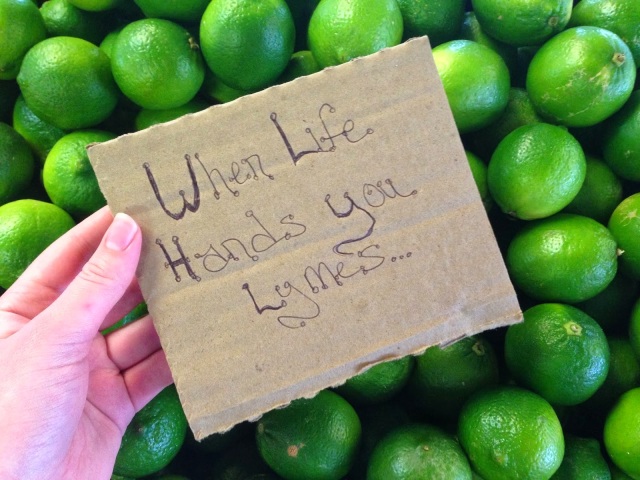 If there’s one thing I’m not good at, it’s hid and seek. I mean, just think about it, if you “win” quote and quote, you go the longest of anybody without talking to anyone. If you “lose” quote and quote, you get to hang around the ‘seeker’ the whole time, chattering up a storm. What’s the point of staying hidden? So pretty much, I just walked a few feet away into the tall grass and laid down. Silly me, I thought I’d be found right away. Lands sakes, I ended up being the last person for Damien to find. How did that happen, folks?
“You want to stay longer?” Julia slid the bridle off of my horse after we were back at the stables. “Abbie and I are going to go in and hang out in my room. You’re more then welcome to join us.” Julia turned and sent a glare to Damien just as he was opening his mouth. “And no, you are not invited. Girl time only.”
“I’d be delight to stay.” I grimaced. “I can’t though. I need to get home and practice for my upcoming audition.” I gave Muffins a final pat. “Thanks for having me over for the ride, picnic and games.”
“Speaking of games, that was so not fair.” Julia shook her head. “You shouldn’t have won. You weren’t even trying.”
“Some people are so good they can’t help but winning.” I gave myself an exaggerated pat on the back.
“Right.” Julia made the glaring face at me that she normally reserves for Damien. “Good luck on your audition.”
An hour later, I was up in my practice room. It’s on the second level of my wing, connected to the Music Hall, which is where I sometimes host concerts. The Practice Room is soundproof, but Darrick hooked it up so there’s a monitor that’s connected to the security office. I guess my family’s paranoid that I’ll choke to death or something and no one will hear me.
Standing in front of my wall of mirrors, I played some warm up exercises on my violin for a good half an hour before rewarding myself with playing several of my favorite songs and letting the music carry me away. Lots of people don’t realize that most of the hours I’m working on music aren’t filled with lovely sounds, but rather playing scales and practicing techniques that leave my ears ringing.
I continued playing until the bell rang for dinner. I know the average American family doesn’t eat together, but to us, it’s one of the most important parts of the day. It’s kinda like a mini business meeting with everyone in the family having a part of Emerson Airlines. (Read that: We can hardly go for two minutes without referring at least once to business.) As weird as it may seem, we sometimes even Facetime with Jason a little bit during our dinner, it works well since we generally eat about the time his college classes let out (he’s out in California), and he likes being filled in on any new business developments.
Sunday and Monday slipped by with me spending almost as many hours in my practice room as I normally did at school. It felt good to have my fingers deep in music all the time, and getting ready for the audition made it all worthwhile.
“Don’t overdo it now, Madalyn.” Mom’s usually happy face was turned down in a frown when I told her good night on Monday night. “You look awfully tired. I know the audition is really important to you, but it’s not worth getting sick over, is it?”
I shrugged, it’s true I had been feeling a little down all day, but I didn’t want to mention it or else the next thing I knew I would be downing vitamins and eating a steady diet of plain Greek yogurt, fish and fresh veggies. Yes, I’m serious folks, that’s Mom’s remedy for any and all ailments. “I’ll go to bed before too long.” I had been planning on practicing until I couldn’t keep my eyes open any more, but I was tired, and the audition wasn’t until Wednesday, I could afford to get a good nights rest.
“Maddie? Madalyn?”
I knew right away I had somehow shut off the alarm and slept in. “Mom?” Opening my eyes, I saw her opening my breezy white curtains, not that it made a difference if they were opened or closed, they didn’t block any of the sunlight.
“Are you feeling alright?” Mom’s running shoes squeaked on my hardwood flooring as she came over and sat on the edge of my bed. “I was coming to see if you wanted to go on a late morning jog with me to take a break from your music. How late did you stay up anyway?”
“I went to bed as soon as I said good night to you.”
Mom’s forehead squished down into little lines, “Really? Well, I guess that’s what most kids do the first week school’s out, they sleep in.” For Mom, that was a foreign idea, kinda like expecting a trash dump to smell good. Mom’s an early morning person if there ever was one. In fact, one time when Katie complained about having to get up early Mom told her that she hadn’t missed a sunrise since her tenth birthday. Yikers.
“I’m not most kids.” I sat up, hoping it wasn’t too late. (For Mom, 7:30 is most people’s noon.) I don’t like sleeping in, sure I like sleep just as much as the next kid, but somewhere in-between Mom’s genes and being raised by her, I learned to love early mornings. Swinging my legs off the side of the bed, I started to get up, then stopped.
“Are you feeling alright?” Mom asked again.